Fall is Here, and It's Very Wet in the North


Summer is long gone. There's snow on the mountain tops, the trees have been changing color for weeks and many are nearly bare of their leaves. Alaska has been battered by storm after storm after storm and many communities are dealing with floods. Homes have been washed away, flooded, roads have become rivers before being swept away, and even the railroad has a stretch of track hovering in mid air, its supporting soil and gravel washed out from underneath.

It's enough to slightly dent the intrepid Alaskan spirit.

In these clouds of rain there's a silver lining that the hurricane force gusts of winds can't blast away. Everyone is safe. No deaths have been reported due to the high water or falling trees, although there have been several accidents recently.

And yet, here we remain. An earthquake or two didn't set us back, so a few storm clouds won't either.

Now, I admit, I'm sitting pretty and cozy in my new house. No power outages, no flooding, no downed trees. I do have a camp robber carelessly tossing about the seeds I put out. He's too small to eat, so I may let him have his fun for a while longer.

But I'm watching the news, especially for Talkeetna, one of those communities pumping out the flood waters. In a weird stroke of irony, at the beginning of September, I had a new release. Weathering the Storm, Book Three of the Open Windows series featuring those red headed Shaughnessys, is set in Talkeetna, Alaska. During which, there's of course, a big storm.

In no way did I predict the catastrophe actually taking place. In fact, my story is rather mild in the face of the recent devastation that got the governor to declare it a disaster. With luck, that will open up some Federal money to help with cleanup and repair. Rebuilding where necessary.

In the coming weeks we'll get a deeper analysis. I know that this weekend was to have been the Talkeetna Book Festival to benefit the library. I wonder just how damaged the library and the elementary school are, but when people are being advised to boil their tap water and their homes are a foot deep in water, the library is way down the priority list. The school is, of course, higher on the list, but after clean water I'm guessing.

I did hear a report of one Walmart donating food and toiletries for those evacuated to various locations. I'm sure there are a lot of untold stories right now and in the coming days they'll start filtering through FB and the news sources. If you want to help, The American Red Cross is working with flood victims and will happily take donations. Cash donations are especially welcome to help buy the specific items needed. The link goes to the Alaska organization. 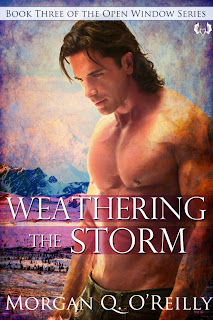 Or, buy a copy of Weathering the Storm and I'll donate the royalties to the Red Cross and/or whatever fund is set up to help the individual communities. Buy the book directly from my publisher this month, September 2012, and I'll be able to make the donation in mid-October.  I'll post the total results here and over at The Morgan Diaries Blog when I get next month's statement.

Let me be perfectly clear:
Purchase a copy of Weathering the Storm between now and the end of this month, and next month the royalties will go to help the communities affected by the recent flooding. Ah, what the heck, same for any sales of this book made now through the end of the year, whether through Lyrical Press, Amazon, Nook or any other outlet. I'll make monthly reports of the totals, good or bad.  I'll be totally embarrassed if my royalties drop to $10. $100 would be better, $1000 would totally floor me and actually do some major good. Anything beyond that and I'll probably faint after I put the check in the mail.

Help me spread the word. You'll be getting a darn good read, and those picking up the threads of their lives after devastating floods will get a little more help. It's a win-win situation.

Many Thanks, and Happy Reading!