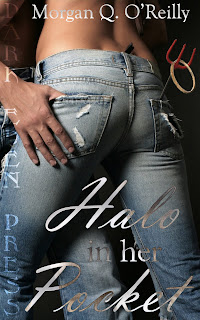 I just have to brag on cover artist Rene Lyons. She did an awesome job on my cover. Better than what I was thinking.

Halo in Her Pocket releases in just two weeks. Am I excited? You betcha! Here's a tiny excerpt:

From: Halo in Her Pocket by Morgan O'Reilly, Copyright 2007

Devyn shook her head, and gathered her purse and discarded shirt. “I don’t know why I let you talk me into these things.”

“Because you have the hottest bod in town.”

“Only because you made me wear jeans that won’t let me breathe and sandals that won’t let me walk like a normal person. Now I look like a slut.” Especially after their two hours spent in the spa right after lunch, which included new hair, new makeup, manicure and pedicure. This shirt was the last touch to the new Devyn. But, hey, it made Ginger happy. Devyn did feel a little better about how she looked.

“A classy slut.” Ginger kissed her on the cheek then pushed her out of the cubicle.

“Gin!” she protested, stumbling in the four inch sandals Ginger had shoved onto her feet earlier.

She fell against something hard and warm. Strong arms wrapped around her and a deep chuckle rumbled under her cheek. Devyn’s hands flew out to grasp thick biceps of iron in an effort to regain her balance.

“Oh, God, I’m so sorry…” her voice trailed off as she looked up into deep brown eyes. Dark, melted chocolate eyes. Sinful, make-a-girl-roll-over-and-beg eyes. Eyes so deep they made her mouth water, her body liquefy, and her inner imp try to think of ways to make him take her over his knee and spank her.

Effortlessly, he lifted her just enough to set her straight on her feet, but he didn’t let go. The way her pulse started pounding it was a good thing. Already shaken by Ginger’s words, any blood remaining in Devyn’s head surely rushed to her nether lips and made them throb with aching need. The reaction was so intense that it felt as though the hard seam of her jeans pressed tight between the petals of her labia. All she had to do was rock her hips forward to increase the pressure on her clit and she’d probably climax. Then again, she didn’t seem to be the only one, if the hard protuberance behind her rescuer’s zipper was any indication. The way it pressed against her abdomen was quite obvious.

Large hands grasped her waist as the devil’s eyes stared down at her.

“Why? I’m not.” His deep voice was quiet, the rumble in his chest teasing her hardening nipples.
She was wrong about the location of her blood. All of it rushed to her face making her feel dizzy for yet another reason, and it made her angry. She was not a blushing virgin, nor was she a dimwitted, ditzy female.

Before she could get worked up, that small, crooked smile of his blasted the rising wind of indignation from her sails.

Ginger left the dressing room and bumped Devyn’s shoulder, jostling her even further into the stranger’s arms. “Well now, this is what I call a fortuitous event.”

Her friend’s amused observation pulled Devyn from her stupor. Stepping back, her gaze dropped, taking in the rest of him before staring at the floor. A crisply-pressed, ivory cotton dress shirt, unbuttoned at the neck, was tucked into black jeans riding low on his hips. Not obscenely tight, they still molded to his lower body in a way that said they were old friends.

“I agree,” the stranger said smoothly. “May I have the pleasure of your name?”

Devyn looked up again. Sun-streaked hair in a variety of shades from warm honey to bleached blond curled over his ears and the collar of his shirt. Warm, just like his tan and burning eyes. High, sculpted cheek bones and a square jaw showing the glint of a golden, five-o’clock shadow. He looked clean and smelled even better with a hint of leathery fragrance clinging to his skin. And tall. Even with her extra four inches of height from the sandals, she still had to tilt her head back to meet his gaze. Six two? Three?

“My silent, yet adorable, friend here is Miss Devyn Wynne. I’m Ginger Gladstone.” Leave it to Ginger to ignore awkward situations and emphasize Devyn’s single state. “And you are?”

One of the warm hands moved from Devyn’s waist to shake Ginger’s hand. “Shane DeVilbiss.” His attention returned to Devyn a moment later. “Pleased to meet you, Miss Wynne.”

Like warmed honey, his voice flowed over her, causing her body temperature to shift once more, this time back to her core as his large hand returned to her waist and pulled her closer. Her fingers flexed as she realized she still gripped his muscular arms.

“Likewise,” she said, and recalled her polite smile. “Now that we’re acquainted, maybe you should release me.”

“I don’t know. I think this style of greeting works just fine.”

“Any friendlier and we’d be in bed,” she laughed weakly. Yeah, she could see him in bed, his dark eyes looking up from between the curtains of her long hair hanging down, her thighs straddling his hard body as he…

Love that cover and it's another woman's butt. Congrats to the *ahem* 'good' Morgan !! Whoohoo!!

That is one fantastic cover but the book is even better. Believe me, this is one hot book you will be kicking yourself if you miss.

Thank you, thank you. I had the vision, Rene Lyons brought it to life and did she ever! Whew!!

Looking forward to seeing it hit the e-shelves!