Mosey on up to the blog. Have we got a dog-gone treat in store for you cowpokes today. We've got the rooting tootingest Western Author sitting a spell with us today. I dun near yipped my kaiyaaa when she agreed to come on The Diaries.

J. Mo, I think you've overdone the Western Channel. Sorry, about that folks. You know how he gets when he gets a burr under his saddle. Great, now, he's got me doing it.

Come on, Morgan O. Let that inner cowgirl out.

Don't think so. Before he goes off and puts his Lone Ranger outfit on again, let me welcome the amazing Caroline Clemmons to our blog.

Caroline: Thanks you for letting me share your blog. Thanks also for the lovely introduction.

J. Morgan: I just finished The Texan's Irish Bride. Let me just say I was floored. You can see your love for the old west shine through with your writing. When did you first discover you wanted to write during that era in American History?

Caroline: I do love reading and writing about the old west between 1870 and 1895, especially Texas settings. I think my fascination began as a child listening to my father talk about his ancestors coming from Georgia to Texas. When I studied Texas history in school, his stories made what I read come alive. I enjoy history of many eras, but the one just mentioned is by far my favorite.

Morgan O: The details in your books are so rich. How much research do you do for your books?

Caroline: I do a lot of research, even though I've read and written this time period for a decade. Each book requires particular research. For instance, The Texan’s Irish Bride required learning about Irish Travelers, Irish blessings, Irish history, and Central Texas. My daughter and I drove through Lost Maples State Natural Area on a trip from San Antonio. No, it’s not on the way, but it was a lot of fun to see the park first hand. We’d been to Bandera years ago, but went through again and also to Medina. The trip gave me a fresh idea of the land in the story.

J. Morgan: You've got a few series out at the moment. I know this is one of those questions all authors hate, but which one is closest to your heart?

Caroline: The book I’m writing is always my favorite, and currently that’s Bluebonnet Bride, book 3 of the Men of Stone Mountain trilogy. I have to admit that The Most Unsuitable Wife, Book 1 of the Kincaids, is probably my all-time favorite. In 2013, I plan to add another couple of books to the Kincaid series, one about Storm Kincaid and one about the attorney cousin, Gabe Kincaid.

Morgan O: Oh good, I like both Storm and Gabe. But which book presented the most challenges?

Caroline: The most difficult book I've written was Brazos Bride. The three Stone brothers are very close knit, so they look and act alike. Giving them distinct personalities and speech was impossible, but I tried. They develop more in the two following books, High Stakes Bride and Bluebonnet Bride. I’m still writing Bluebonnet Bride, but hope to have it completed soon.

J. Morgan: In Irish Bride, you can really get a feel for the characters, especially Cenora and her family. Do you have anything, or anyone, you draw inspiration from to craft such rich characters?

Morgan O: Also, the settings in your books have an authentic feel to them. Do you base them on actual places?

Caroline: My characters are real to me when I’m writing a book. I see them and hear the sound of their voices. I’m pleased you call them rich because I work very hard to create believable characters for readers, but they are not modeled after anyone. But we are a composite of all our experiences, so I use this bit I've heard and that. For instance, hearing about my neighbor’s dislocated shoulder helped me write a scene in High Stakes Bride where the heroine has dislocated her shoulder falling from a tree. My neighbor’s bull lovingly nudged her into a round hay bale, so the experiences are different, but hearing her helped me make the scene realistic. I prefer writing about  fictional towns near real towns. Occasionally, such as with Lost Maples State Natural Area, I use a real place. Using fictional towns gives me the leeway to create whatever I need for the story. No one can say “That street doesn't go there” or “That building was two streets over.”
J. Morgan: You also dabble in Mystery. Which comes easier to you when writing? Suspense or Westerns?

Caroline: Most of my westerns have mystery in them. I enjoy both mystery and romance, so combining them is perfect. I do enjoy writing contemporary mysteries, but right now I’m concentrating on western romance with mystery included, particularly historical romance.

J. Morgan: Before we allow you to saunter off into the sunset, it's a tradition here on The Diaries to hit you with one off-the-wall question before we let you scurry out the door. If you could be transported back to the Old West for one day, would you rob a stagecoach or…

Morgan O: Strap on the tin star and single handedly ride down desperadoes  Good looking ones in tight chaps of course.

Caroline: I’d love to be a deputy and ride with the sheriff after those desperadoes  which is what I dreamed of when I was a kid. I wanted to ride with Roy Rogers and Dale Evans to rid the west of bank robbers and rustlers. No single-handed captures for me, though. I love reading and writing the Old West, but I’m glad I live now instead of then, aren't you?

Morgan O: Thanks, for stopping by today, but before you ride off into that sunset, we'd love for you to dazzle our readers with an excerpt from one of your books.

Caroline: I thought I would give you an excerpt from High Stakes Bride, book 2 of the Men of Stone Mountain trilogy where Alice Price shows up at Zach Stone’s campsite with a dislocated shoulder. 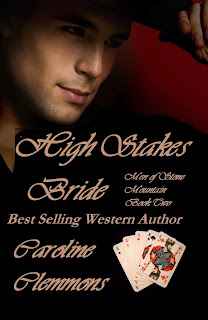 She lay with her face turned away from him. When he leaned over, he realized she’d passed out.

J. Morgan: And, don't forget to tell our readers where all we can find you on the internet and some buy links. Okay, Morgan, can I put my ranger mask back on now?

Print or Ebook at Amazon:

Thanks again for having me as your guest. I’ve enjoyed myself. Yours is a fun place to visit!
Posted by Morgan2x at 12:30 AM

Waving Caroline. I see you survived the wild west with J.Morgan and Morgan O. Loved your post today. As always it's fun to get to know all friends better. I have your story and can't wait to read it.

Best of luck with lots of sales. :)

Hi Caroline,
High Stakes Brides sounds like a winner. I always enjoy books that feature a trio of brothers or sisters. Good Luck on all your Bride noels.

Great interview and excerpt. Congratulations on your book.

Thanks for the opportunity to read your excerpt. Good luck with your book!

Her books are amazing! Loved reading The Texan's Irish Bride and getting to know Caroline. Needless to say, I'm addicted.

Thank you for letting me be your guest. Great blog you have and I'm honored to ride on over and let my horse rest in your corral.

It was great to read that particular excerpt again. Great story, Caroline. I've enjoyed all your books. Looking forward to the next one. :-)

Great scene, Caroline. I could see the setting and the vivid characters. You do that so well. Thanks for sharing this excerpt.
I do love a well-written western romance.

Great interview, Caroline. I also enjoyed my visit to the Morgan Diaries! I love your historicals, Caroline, and eagerly await High Stakes Bride. Merry Christmas to all!

Excellent site I have bookmarked your site..

Thank you for sharing the post.kindly visit us @ tattoo thoughts