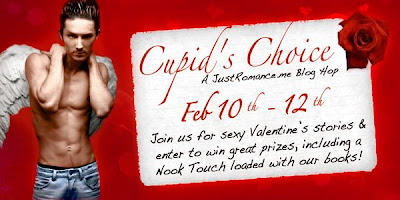 Yes, it's another fun and rollicking Blog Hop put on by the awesome authors of JustRomance.me and we're playing for all we're worth this weekend and getting in the mood for Valentine's Day. If you're starting here, be sure to pick up the hop at the beginning by clicking on the link above.


Frankly, this year it's taking a little work to get in the mood. Jmo and I have both been nose to the grindstone, writing, writing, writing. Which is a good thing. A great thing! But tends to leave our significant others wondering, yet again, where we're traveling inside our heads.


So, with romance in the air, I got to thinking about some of the most romantic moments in my life and I asked Jmo to give me a little nudge. He never disappoints.

It was a dark and stormy night. Not really, but we authors say that when we're struggling to come up with something genius. When it comes to Valentine's Day, that means we say it a lot, especially us guys. No matter how romantic we seem on the outside, that one day of the year scares the crap out of us. Mainly because we know nothing we do the rest of the year to show our wives how much we love them matters as much as we do this one day of the year. That said, my wife is the greatest! She never asks for much. A dinner out. Great chocolate and no Star Wars for at least the day of. I can usually manage two of those.

She, on the other hand, knows exactly how to tug my heartstrings. Every year she makes it a point to get me the most romantic thing in the world! Yep, you guessed it. A giant Reeses peanut butter heart. Hey, I'm a guy. We're simple like that. The point I'm trying to make is this. Women know men better than we know them. Men in general spend at least a good week coming up with the perfect gift, or so we think. Like women want something to make housework easier or a Quesadilla maker to, well, make us quesadillas. That realization hits us, oh, about the time our special someone tells us that the night before Valentine's Day. Which is why the local Walgreen's is bombarded and drained of not-so-nice smelling perfume and cheap heart shaped boxes of chocolates by 9am Valentine's Day. It also explains why restaurant reservations suspiciously get lost when we take you out for fine dining.

So, ladies, in advance, I'd like to apologize for my bonehead brothers in confusion. We promise to do better next year or you can kill us. It'd be so much simpler than torturing us for the rest of our lives.

So that's why we spent an hour in a crowded anteroom at Sullivan's Steakhouse last year waiting for a table? A last minute decision to go out for a late dinner on Valentine's. At least they served wine and munchies while we sat elbow to elbow with a few dozen strangers.

And while that was, in a way, very romantic, it's really hard to beat the Valentine's Day before our wedding.  Yes, there have been many good ones since, but that one, well. Let me tell you the story. There's a teeny bit of history here.

For many years my father was involved in Rotary and every year his club sold and delivered red roses. For $10, the businessman who forgot all about the day could have one dozen long stemmed red roses delivered anywhere in the city. Being the driving offspring of one Rotarian, there were a few years I got to do the delivering for him. Then there was the year I was working elsewhere and couldn't take the day to do the running. I was at my desk, working high above of busy warehouse when my sweetie arrived with a dozen red roses. He didn't say a word, just handed them to me, turned around and left.

Curious, I went out on the balcony over looking the warehouse and watched as he walked across it to the other office and out the door. A few minutes later he came back carrying two dozen red roses. And the girls on the other side all crowded up against the window to see where he was going. He climbed the stairs, handed me the roses, turned around and went back the way he came.

Three trips, and a large bucket later, I had in my tiny office, six dozen roses. He made one more trip and came back with the seventh, and final bundle of flowers.

I was laughing and amazed and completely won over. Again. Somewhere deep in a dark box I have a picture of all those roses. I need to dig it out. Twenty plus years later, it's a good reminder of how things started out. A good benchmark for all we've been through and how much better things are today.

Have a special Valentine's memory? Planning something big this year? One commenter will win a copy of Jmo's book The Southern Werewolf Chronicles Book Two: Were the Moon Don't Shine, which is also up for Review of the Week at Long and Short Reviews. Commenters will also be included in the big drawing for the Nook Touch which will be loaded with books, such as Morgan's Til Death Undo Us, Book 1 of the Open Windows series. Things get really hopping here and the generosity bug could take a big bite outta us and we might find more stuff to give away.

PS: If you haven't met us before and are curious, and who isn't really, at the top of this page, on the right, is a list of pages associated with this blog. The list includes J. Morgan's books, Morgan Q. O'Reilly's books, and a some we did together. Ya know, just in case you want more stuff to read, and who doesn't! We love to read! So dig in and enjoy.

Aww, that was just so sweet. Can totally see why it would remain a special memory.

My hubby and I always go out to dinner, but we go the night before. It's still romantic, and a lot less crazy.

Aww that is so sweet, both of you are just adorable..Have a naughty Valentine's Day..

Thanks, guys. Glad you enjoyed our Valentine's Day insanity!

we are planning a nice dinner out on Sunday to beat the crowds.
mcv111 at hotmail(dot)com

Great post! I don't have any plans for Valentine's Day this year :( But last year I did get the best gift EVER...an engagement ring from my wonderful man!!
Ashley A
ash_app@hotmail.com

Oh that was a great post.
Happy Valentine's Day.
We usually go out before the day and avoid the rush.

My sweet husband is a quiet man, a deep thinker not prone to talking about his feelings... the best Valentines Day in memory was when he wrote me a list of 100 things he wanted me to know... I cried daily for two weeks every time I picked up that list and read it. It was a count down from 100... to one...
The number one thing he wanted me to know was that the first time he laid eyes on me he knew that the rest of his life had changed for the better. We've been married 17 years.

Aww. What a memory! Thanks for sharing! Have a wonderful Valentines!
shadowluvs2read(at)gmail(dot)com

That's a great story! Totally won be over too. =D Thanks for sharing!

You got the red Vader too, bonehead. BTW, thanks for the chocolates. ;) Jenn

LOL - This sounded like natural male language. ^_^ You have an eye for that.

Happy Weekend everyone. Turns out it's a working one for my hubby and me. Deadlines and client proposals have no mercy on fun holidays.

Which means more than ever I want to hear happy stories or what special plans you all have. Keep them coming!

My hubby and I both work different shifts so we will go out to eat on a evening we both have off! As long as we get to spend time together that is what counts!

My favorite memory is when my husband wrote a poem about what a great mother I am and why he loves me.

Awww, that was soooo sweet. I've been married ummm a long time, and my husband doesn't have a romantic bone in his body. Sometimes we do go to dinner on Valentine's Day, but no little spur of the moment love notes, or just a single flower any day to say I love you.
luvfuzzzeeefaces at yahoo dot com

Now that is one sweet man you have there - he was definitely worth hanging on to :D

I'll be going out to dinner with the hubs and probably dropping by the local casino...before heading back home. Thx for the giveaway op...Happy Valentines Day <3

Hope you have great valentines day. I appreciate the read as well

Hope you all stop by the chat at http://www.gemsivad.com/ starting, oh, that would be now! 7pm Eastern, 3 pm Alaska and all points in between.

Thanks to everyone who came by and left a note. We have two winners of our books!

Shadow gets a copy of Til Death Undo Us

Ilona has won a copy of J. Morgan's Were the Moon Don't Shine.

Congratulations!! And many thanks for stopping by and leaving us a note. We love notes!

Thanks to everyone for stopping by. Wishing you all a wonderful and romantic Valentine's Day.