Love to Stake Another Day 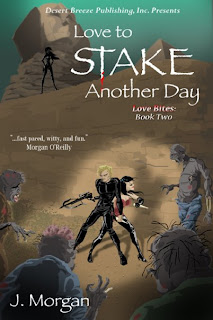 Halloween is over! That doesn't mean you get to miss out on all those things that go bump in the night and the fun they make. Thanks to a special dispensation from the Vampire Council and St. Vlad's—no not that one—League of Slayers the fun is only beginning.

Love Bites Book 2: Love to Stake Another Day is here to get you over that Post-Halloween Slump. Desert Breeze Publishing and J. Morgan are proud to present the second installment of the series that's so Fangalicious, Vampires everywhere are suffering from bad dental hygiene and a severe case of stomach cramps from all the laughter.

Love to Stake Another Day

Lyssette Ravell finds herself smack dab in the middle of a mess her brother started. When a new threat surfaces to threaten the Vampire/Human alliance recently set in place, she finds herself teamed with Kristain Marshall, who just so happens to be her almost brother-in-law.

Sent to rescue her brother Eli from the clutches of Rudolpho's daughter Valerious, Lyssette finds more than she bargained for. There's a traitor on the Vampire Council. Now, Lyssette must save her brother, root out this traitor and at the same time avoid at all cost falling in love with Kristain, the one man who could make her forget all the vows she's ever taken as an agent of the VCI.


"Let go of me!" It would have came out more assertive if the towel hadn't slipped and I had to scramble to make good on my promise not to show him the money again today.

Kristain pulled me into his rock hard chest, trapping me. "Not until I have my say."

I gave up trying to fight him. Not sure, but I thought my nipples were liking it entirely too much. "You've said enough."

"Maybe I have, but I've been saying it the wrong way. I'm attracted to you. More than attracted to you. Don't ask me what I mean by that, because hell if I know. I just know I can't get you out of my head and that makes me a little stupid around you when all I want is to be James Bond." He let me go and just walked away, leaving me semi-naked and confused. "So, if you want to leave, leave. I can understand why you would want to. I've been nothing more than a horse's ass since the first time we met."

I knew that touching moment would pop up sooner or later. "You're not always a horse's ass. Sometimes you're a cute buffoon."

"At least that's a step up from where I thought I was. Lyssette, I shouldn't even be thinking about you this way."

"Why, because I'm a Vampire?" Not that I didn't agree with him, but I wanted a damn reason.

"Hell, no. After seeing Donnie and Savannah together, what we are ¿ or aren't ¿ isn't an issue."

"What then?" Now I really wanted to know.

"For one thing, we're partners and for another we're family. Well, sort of. The thing is, if we started something and if it ended badly it wouldn't just affect you and me, it could tear Savannah's marriage apart. As much as I want this—" He waved his hands between the two of us. "I won't do anything to hurt her. She deserves every bit of happiness that comes her way."

He'd actually thought this through. I'd taken him for one of those insipid-macho-girl-in-every-city types. He certainly had the swagger down. Let's not forget how well he could fling a line of bullshit at fifty yards without missing a beat. Granted, he was probably a toad and this could be just another one of his tricks. As good as that sounded in my head, I didn't get that feeling. Hard as it was to believe, Mr. Marshall appeared to be baring his soul to me. I didn't see that one coming.

"You're right. It would definitely complicate things so it's a good thing we're not taking this any further." We weren't. Right? My mind said no, but my body seemed to think it might be a damn fine idea. Stupid men showing their sensitive side.
Posted by J. Morgan at 5:36 PM