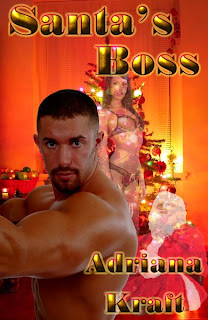 Joy Danser has believed in Santa since childhood—now Nick Polaris shows her Santa can deliver an adult package beyond her wildest dreams!

Blurb:
Always authentic, Assistant Mall Manager Joy Danser insists that her mall Santas must have real beards so children can believe. But even she is unprepared for the very real Santa who visits her bed invisibly this Christmas season. Is she dreaming, or has she gone mad? Joy consults Sophia Nardiz, manager of the Magical Gypsy shop at her mall. Sophia reads her palm and gives her a cryptic message: Joy is at a crossroads, and she must trust her intuition.

Owner of the Magical Gypsy chain and a true Gypsy himself, Nick Polaris is thrilled to play Joy’s Santa, in the mall and in her bed, but he knows it’s only a lark. For true love, he’ll need someone with Gypsy blood. Must he renounce the Scottish redhead he enjoys so much?

The opening scene is up at our website - here's a short excerpt when the two women first discover each other:

EXCERPT:
Sophia pushed back dark tresses of hair from her shoulder. She smiled as if she knew a secret. "And this visitor claimed to be Santa Claus?"

"That's right. I felt his beard and mustache." Joy shuddered.

"I'm sure you did. You look quite pleased with the memory."

"Don't say that, girl." Sophia cradled Joy's hand and Joy experienced an immediate calm spreading over her body. "What you describe is quite plausible." Sophia smiled thinly. "You have too many aches—pleasant aches—for this to be something only in your mind. It could be someone with pyschokinesis and telepathic powers. Rare, but not impossible. I have known persons with such powers."

"Not at all. I believe you must be very special to have received such a gift."

"But you don't think it was Santa?"

"Does that matter? Someone thinks very highly of you to want to nurture your belief, maybe not in Santa only, but in a world beyond that which you typically know. In my culture, we'd say you were blessed."

"You received, and there was no expectation of return."

Chuckling, Sophia interjected, "I'm sure he did. Who wouldn't? May I look at your palm a moment?"

"Of course." Joy tried not to tense. This was part of what she'd hoped for when she'd decided to seek out Sophia, but she probably wouldn't have asked.

Sophia's features were blank. "You do seem to be at a crossroads."

"A crossroads," Joy squeaked. "What kind of crossroads?"

"I'm not positive. Love and career seem mixed up. Ah," Sophia smiled softly, "so your first love was a woman."

"One." Joy's mouth went dry. She hadn't realized her knees had clamped tightly around one of Sophia's knees. She tried to unlock her grip and then gave up trying.

Sophia grinned at her openly. "It is good to love a woman now and then. I've often found if I only love a man or only love a woman, I'm out of balance. How about you?"
Posted by Morgan2x at 1:01 AM

Love the excerpt for this one. Interesting looking story!!! Gonna try and keep up here and pop in every day to see what you are all up to...hehe!!!

This one looks very intresting. Will have to keep my out about this one.

Love the book cover. Enjoyed the excerpt here. Another book to add to my TBR list.

Thanks Valerie - you never know what I'll be up to next lol!

And thanks Loretta, another wonderful cover by Martine Jardine. She's spectacular!