Excerpt: Lessons from a Courtesan by Jenna Petersen 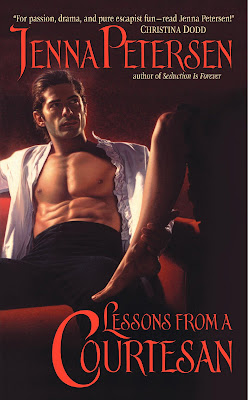 An almost imperceptible shiver worked its way through Victoria’s body. It was such a tiny movement, but it hit Justin in the gut like a sucker punch. Damn, but he wanted this woman. More than that, he wanted to make her crave him day and night. He wanted to be certain she left London with memories of him burned on her for life.
A cruel desire, when he had no intention of living as her husband in anything more than name only. That hadn’t changed. The obstacles that stood between them in the past still existed. He was even more uncertain of her motives than ever. Yet he still wanted her to surrender to him in every way.
He really was an unbearable bastard.
Victoria turned slightly and gazed up at him. Her lower lip was trembling, her eyes slightly glazed. “I didn’t think you kept mistresses, Justin. What will people say?”
He shrugged.
“That you are the most desirable woman in the Empire,” he said softly. “And I only take the best.”
Her gaze darted away. “You don’t think I’m the most desirable woman in Britain,” she said, her voice barely carrying even with the miniscule distance between them.
“Don’t I?”
She shook her head. “You never have.”
He tilted his head in surprise and examined her face carefully. She lifted her chin, daring him to refute her words, but behind her bravado and contempt, he sensed a long buried hurt. Though he doubted she would ever admit that to him.
He should have left it be. Let her think that he never wanted her for more than a few moments, but there was some part of him that couldn’t let that belief exist.
“You’re wrong,” he murmured as he slipped his fingers into her hair and cupped the back of her head. With a gentle tug, he forced her to look into his eyes. “You are so very, very wrong.
Available Now from:
Posted by Morgan2x at 12:01 AM

Great excerpt!!!! So loving it, Jenna!